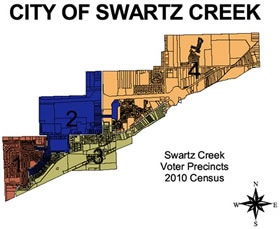 The City Clerk is responsible for the management and preservation of the official records of the City of Swartz Creek.  The City Clerk maintains all City Codes, Ordinances, Resolutions, Policies and other legal documents.

In addition, the City Clerk:

The office serves as the  voter registration authority for City residents and works cooperatively with other jurisdictions in the maintenance of voter registration records throughout the State of Michigan.  The City Clerk is the Chair of the City’s Election Commission.

The City of Swartz Creek has one polling location, the United Methodist Church located at 7400 Miller Road,  that accommodates all four of the Wards.

If you would like to register to vote, you may click the link to the Michigan Voter Information Center.

If you would like an absentee ballot click the link to The Office of Secretary of State.
Absent voter ballots are available to registered voters for all elections. They provide a convenient method for casting a ballot instead of attending the polls on election day.
Insert all above before the Fill out the necessary form and mail or deliver it to the:
Clerk's Office
City of Swartz Creek
8083 Civic Dr.
Swartz Creek, MI 48473

If you are interested in being an election inspector for the City of Swartz Creek please fill out the Election Inspector Application through the link on the right of this page.  Turn in application to the City Clerk.

The Freedom of Information Act (FOIA) is a Michigan statute that gives the public the right to documents regarding the affairs of government, public officials and public employees.  Under the Act, a person has the right to inspect, copy or receive copies of “public records” of a “public body”.

Call 911 For ALL
Fire & Police
Services

Only the Following are Available to Pay Online: